Milestones in the Development of the Quay

We will never know for certain when vessels first landed at the area we now know as the Quay. Nor can we be sure what type of boat was first used here, perhaps for trade, or simply to cross the River Exe. For many years the river was fordable near where the current bridges cross it and records indicate that packhorses were able to cross alongside the line of the medieval bridge, perhaps to evade the tolls.

From 45 to 75 AD a Roman settlement was established where Exeter now stands and it is likely that a landing area on or near the red sandstone shelf in the vicinity of the current Quay House was in use. The Romans are judged to have used Topsham as their main port, but with the River Exe being tidal, it is likely that they brought boats up as far as the western edge of the fort and later town that existed into the 4th century. They are also thought to have built a wooden bridge across the Exe, using stone piers to support it. It is also possible that they dug out leats and installed mill wheels along the eastern bank of the river, under the protection of their fort.

The marshland outside the western city wall was drained in the Saxon period, probably by improving the Roman leats, if they existed, or by increasing the number. By the beginning of the 13th century this was Exeter's main industrial area, with water powering mills, tanneries and breweries. There is reference to stone buildings along the quayside from 1240 onwards and it is likely that the area was in constant use for grinding corn and fulling woollen cloth. Access to the sea meant that goods could be moved from the Quay direct to the near Continent.

In 1284 this trade was challenged by the actions of the Countess of Devon, Isabella de Fortibus, who built a weir across the river to power her mills, leaving only a 30 foot gap. In 1311 her successor, Hugh de Courtenay, blocked up the gap completely, cutting off Exeter from the sea. Shipping was forced to dock at Topsham, pay dues there and use the Courtenay warehouses. Exeter's warehouses lay empty. Endless legal arguments failed to change this situation until an Act of Parliament in 1540 allowed Exeter to reopen the river, but by then it was so silted up that even the smallest of vessels struggled to reach the Quay. The solution proposed was a canal.

John Trew was appointed to construct the canal, initially on the basis of making the Exe navigable from its mouth to the City's water gate for ships of up to eight or ten tons. His first plan was to build the canal to the east of the Exe, using the St James leat, but this was soon abandoned in favour of the west side, using the flatter land in the parishes of St Thomas and Alphington. A weir was built at St Leonards and the water for the canal diverted from there. Although opened in 1566, many structural problems were encountered up to the late 1590s, as well as significant financial and legal issues for Exeter's governing body in maintaining and operating the canal.

Nevertheless, trading activities at the Quay increased, as depicted on the 1618 version of Hogenburg's map above, with the "Kay" shown clearly and its "Crane Seller".

However, the entrance to the canal was too far up the estuary and only best accessible on high spring tides. The canal had been extended as far as Topsham by 1675 and made deeper between 1698 and 1701, but it was to be a further 126 years before the present entrance at Turf was available and by this time modern ocean-going ships were far too large for the canal.

The Quay area was remodelled in 1676. The wharf, built in 1566 with hewn stone blocks, known as ashlar, was replaced with a dock 6m wide and 50m long and a thwart weir. The Quay House of the 1590s, reputedly the earliest commercial port building in the UK, was rebuilt as a two storey warehouse with eight doors leading out onto the new lighter dock. The Customs House was built in 1680-1 [the oldest such brick building in the country]. The Port of Exeter had control of all ports between Lyme Regis and Teignmouth and at one time over 100 Customs staff were based there.

By the 1670s ships of 60 tons were docking at the Quay and by 1698 vessels of 200 and 300 tons. The Quay would have been alive with the movement of lighters carrying coal, timber, tea, coffee, spices, wines and spirits, as well as the huge volumes of bales of woollen cloth. At Topsham goods were transferred to vessels heading for Holland, France, Germany, Spain and Portugal, as well as the West Indies.

Elsewhere, a ferry, the forerunner of the Butts ferry, dates back to the 1640s. The Wharfinger's Office was built in 1778, following the 1770s extension of the Quay. Bodley's, the local iron foundry built the transit shed in 1820. In 1830 Exeter celebrated the grand opening of the Basin, the final piece of the canal. It was 300m long, 30m wide and had a constant depth of 5.5m, with provision for vessels up to 400 tons. Warehouses were added in 1834 [Cornish's] and 1835 [Hooper's], with provision for storing tobacco and wine and cellars for cider and silk were cut into the cliffs downstream. Sadly this progress was offset by the arrival of the railway line at Exeter in 1844. There were plans for a branch line along the Quay and down towards Powderham, but the eventual course took the railway away from the area, adding to the sense that the the Quay's days as the main trading point for the City were numbered. Items such as coal, timber and oil continued to be shipped along the canal to the Quay, but with fewer vessels using it, it became difficult to justify the upkeep. The last commercial vessel, the Esso Jersey, made its final trading passage in 1972. 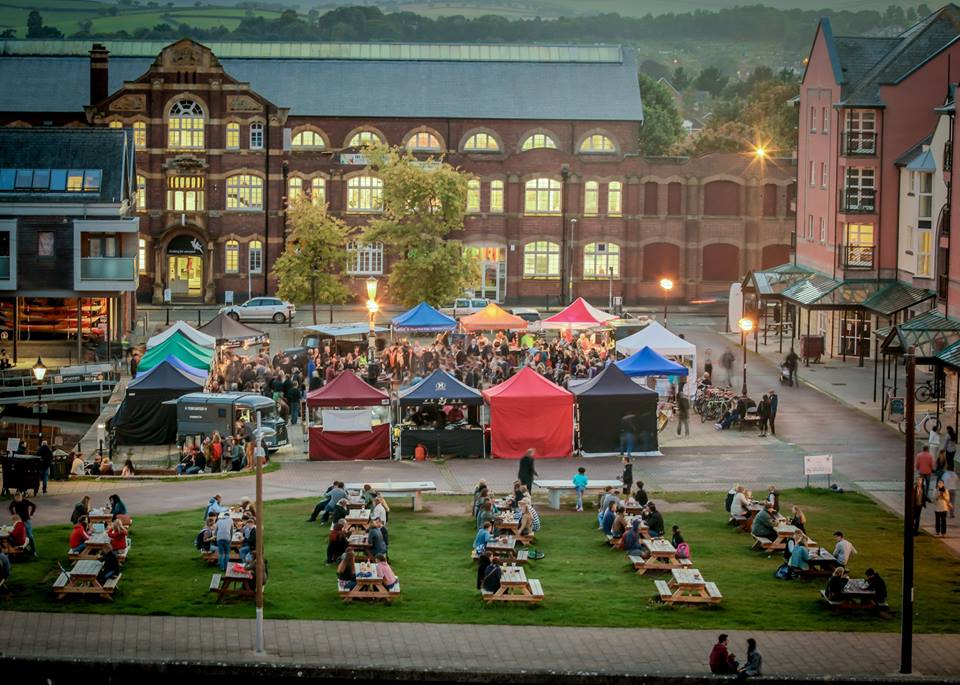 Today, this unique element of Exeter's heritage is preserved by the actions of the Exeter Canal and Quay Trust, established in 1981. Most of the old buildings and warehouses have been renovated and reoccupied. Other areas have been developed with a mix of shops, cafes, restaurants and licensed premises and galleries and the work is ongoing, with waterside events and concerts, walks and cycling paths, all providing a stimulating venue for Exeter's citizens and its visitors.